I am just a medium, SQL Server the Goal

Previous Posts in this series

In my Previous post, I had talked briefly about the windows Memory Management and how SQL calculates its Buffer Pool and MTL. In this post, I would be talking mainly about the workings of the SQL Buffer Pool and the MTL, and how to figure out the memory usage by SQL and its components. This post would be specific to SQL 2000 unless specified otherwise.

SQL Memory Management is Dynamic in nature, meaning SQL can allocate or de-allocate memory in the Buffer Pool as per requirement. In order for the SQL Server to effectively manage its memory allocations SQL Server 7, introduced a layer of Memory Manager that manage various types of memory requests in the SQL Buffer pool.

The important ones are

The idea behind using these managers is very simple. Consider an Analogy. In a company with 1000 employees, If there is only one manager, management becomes really difficult. One the second hand if we have 10 managers managing 100 employees each, it would be easier. With multiple managers it becomes easier to manage and report the usage.

The amount of memory being consumed (out of the 2 GB user mode VAS), can be easily tracked using either of the following options.

The OS reserved/OS committed/OS in Use sections are for all allocations which have been made in the SQL VAS  by the memory managers (more than 8 KB allocations) and also for all external allocations coming from external components loaded in the SQL Space. In short, this can be used to track all the allocations made in the Mem-To-Leave area.

Apart from the output for the Memory Managers, another important section in the output is the first section of the output, which can be used to see how are the Database Pages allocated in the BPool.

The important counters under this object are

Memory discussions for SQL Server is not complete without the mention of two very important operations, Checkpoint and Lazy Writer.

Checkpoint: Checkpoint is the process wherein Dirty Buffer (database pages which have been modified by a DML operation) back to the disk.

Lazy Writer: The sole purpose of Lazy Writer is to maintain some free buffers in the SQL Server Buffer Pool. Lazy writer runs periodically and check which buffers can be flushed and returned to the free pool.

With SQL Server 2012 there has been considerable changes in the way Memory is allocated and utilized. In Part 1 of the SQL Server Memory series I would talk about memory configurations on windows Servers and then discuss how memory works for SQL Server 2000.

All windows Application (32/64 bit) are designed to work with the Virtual Memory concept in Windows. Each process is provided with a fixed size virtual memory, regardless of the amount of RAM on the machine. The VM limits (a.k.a the maximum addressable memory limit) for an application is as follows

Each application running on Windows has to comply with the Virtual memory Limits as imposed by the architecture.

This Virtual Memory(hence forth referred as Virtual Address space) is divided into 2 regions “User Mode” and “Kernel Mode”. An Application works with only the user mode. In other words they can only play around with the User Mode VAS, and do not have any control on the Kernel Mode. 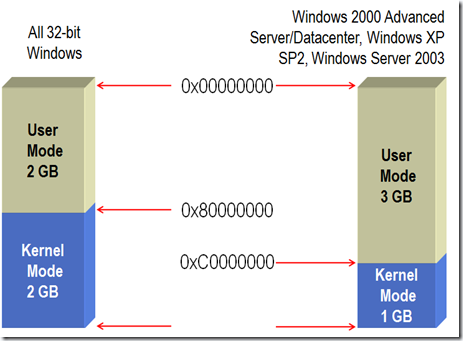 On a 32 bit(x86) environment the User Mode is 2GB (8 TB in 64 bit environment) and can be increased to 3GB (reducing the kernel mode to 1 GB) using the /3GB switch in the Boot.ini file. With windows 2003 servers a new boot.ini switch was available which allows the user mode to be configured to a value between 2 GB and 3 GB, depending on the user requirements.

On a 64 bit environment, the VAS is practically limitless (8 TB) and hence the application can potentially access all the memory on the Machine.

Physical Memory allocations and usage is directly controlled by some components which runs in the Kernel Mode (Windows Kernel Code). A User Application has no control on the Physical RAM. In order for the Application to access Physical Memory, it provides the windows Memory Management Unit(MMU) with a Virtual address (4 Byte – 32 bit address in the VAS) which is then translated (address translation) by the MMU into a physical address. Windows then reads the content at the physical address and returns it back to the application.

An Application running with default configurations (without AWE in case of 32 bit applications) cannot access more memory than allowed by the size of the User Mode VAS.

SQL Server like all other windows application follows this Virtual Memory concept. Hence a 32 bit SQL Server by default cannot access more than 2 GB of RAM.

SQL Server divides its User Mode VAS into two section. The Buffer Pool and Memory to Leave (MTL region). The MTL is a free memory region inside the SQL VAS, and is used for the following

The Buffer Pool is a pool of 8K buffers (memory pages) which are used by SQL Server for its operations. Any allocation in SQL Server which requires 8 KB or less memory comes from BPool. SQL Server Data Cache is created in the BPool.

As the RAM on the machine increases the BPool would continue to become smaller and can cause a lot of performance issues.

For the 64 bit environment the following changes are applicable.

As mentioned, a 32 bit SQL running on a 32 bit Windows Server by default can only use 2 GB of memory. In order to allow SQL to use more than 2 GB of memory, you would need to use one of the following techniques

In the next post, I would be talking about how memory operations works in the BPool and MTL.