I am just a medium, SQL Server the Goal

September 21st 2013, marked a remarkable day for the SQLBangalore UG, BITPro, PSBUG (Power Shell Bangalore User Group) and BDotNet UG, when all the four groups came together to host one of the most extensive technical conference ever in Bangalore.

With over 250+ Participants and 20 session being conducted in parallel across three conference rooms at the Microsoft facility at Bangalore, this easily was the biggest technical conference brought to you by the community. I had the privilege to be part of the SQL Server Track, both as the host and the presenter and it was a pleasure to see close to 130 participants coming in as early as 8:30 AM in the morning on a Saturday, which speaks volumes about their passion and the desire to learn.

The Day started on a very healthy note with Ryan Fernando (Founder:Qua Nutrition L|B) speaking on “Techies Guide to Better Nutrition”. Ryan’s talk was really an Eye opener and with my wife accompanying me, it opened up the Pandora’s box. I don’t think I need to mention what kind of treat, I am in for later when we reach home.

The second session was on Big Data, the hottest commodity on the Database market. Amarpreet Basan, Technical Lead, Microsoft SQL Server Support team at IGTSC talked in details about Big Data and did some really cool demo’s with HDInsight and Hadoop clusters. The slide decks and the demo’s scripts for this would be available on the SQL Bangalore UG page on Facebook.

I had the privilege to present next (this being my 4th session for the User Group). For this session I went with something which we always talk about in Best Practices, but not necessarily follow it in when working with SQL Server. I focused mainly on the Optimizing your Backups, where in we talked about how to optimize the backup operation for your SQL Server. 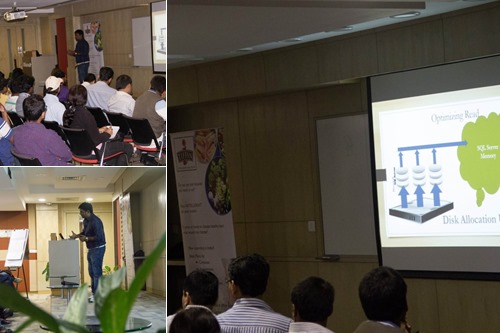 Prabhjot Kaur, (IGTSC, SQL Support) went next with her session on demystifying the myths of Tempdb. All the participants present work with SQL Server day in and day out, and would have spent a considerable time optimizing Tempdb for their SQL Server environments and the important of this presentation could be estimated from the fact that here was pin drop silence in the room for the 50 odd minutes when Probhjot was talking.

Next in line was the most important part of the day, LUNCH. A highly nutritious lunch was provided by iTIFFIN (No Its Not An APPLE product). With 499 Calories and absolutely the right ingredients, this was exactly what the doctor ordered for the DBA/Developer crowd in the room.

To make lunch even more interesting we had Balmukund Lakhani (B|T|F) with his usual trivia’s and jokes. All in all the 45 minute lunch break was both healthy and fun filled, thanks to ITiffin and coordinators for this event.

Post lunch we had 3 sessions lined up on some of the most sought after topics in the Market right now. We had Ajay Kumar (Technical Lead, IGTSC) and Sunil Kumar B.S (Escalation Engineer IGTSC) talking about SQL Azure, the Microsoft Cloud offering for SQL. Their session slide deck and the demo content would be made available on the SQL Bangalore User Group page on facebook.

This was followed by Sumit Sarabhai’s (Support Escalation Engineer, IGTSC) session on Query Tuning and Optimizations. With a room full of SQL Developers and Administrators, there was no doubt that this would end up as the most saught after sessions. I mean, is there a SQL Developer/Admin who hasn’t had the bad luck of having to tune a query and make it run faster. Sumit’s session covered some of the salient points about what are the things to do when tuning a query.

To end the sessions, we had Selva R. (Sr. Support Escalation Engineer, IGTSC), presenting on one of the coolest (if not the coolest) thing in the MSBI stack, Power BI. Speaking about Power BI, always reminds of a line in the Second Spiderman Movie (starring Tobey Maguire): “The Power of sun, in the palm of my hands”. Such is the power of Power BI, the master set comprising of Power View, Power Pivot, Power Map and Power Query.

We finished the day around 5:30 PM, with Balmukund fittingly pulling the curtains on a day filled with learning and knowledge sharing. After having worked the entire week and then having spent another 9 hours on a weekend, I thought I have had it enough.I could not have been more wrong, it was heartening to see most of the folks hanging around to interact and sharing their SQL Server experience with one another.

To sum it up, it was an over whelming experience being part of such a fabulous event, and the only parting words I could think off is “May the SQL Server be with you”